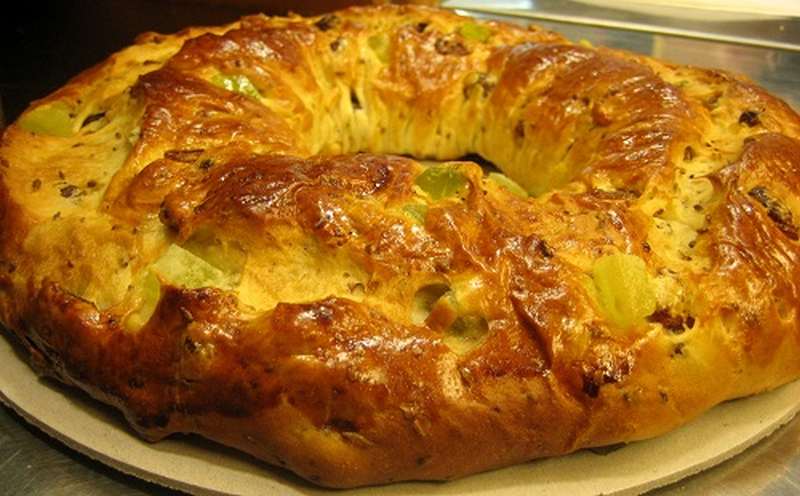 On January 29, returns to the traditional feast of San Costanzo, patron saint of the Perugia.  He was the  first bishop, was buried outside of the city’s Roman walls after his decapitation in the 3rd century.

Celebrations start the night before his feast day, January 29, with the luminaria, the candlelit procession to the Church of San Costanzo, built on the site of his martyrdom.

On the Sunday after his feast, i Perugini gather at a solemn High Mass celebrated in his honor in the Cathedral and then throng the eighty stands at the traditional open market, la Fiera, which always follows a saint’s feast day. The Fiera di San Costanzo fills Borgo XX Giugno, the street heading to his church, San Costanzo.

Legend has it that every year during the festival of San Costanzo, young girls bear in the church dedicated to him in order to draw wishes for their wedding watching the play of light reflected on the image of the saint. If San Costanzo will not have winked, and then predicted the wedding within the year, to give consolation to the girl’s boyfriend the typical sweet of San Costanzo.

This is a ring-shaped cake;  it is cut to look like a pentagon which, according to tradition, indicates the five gates of Perugia. The Torcolo di San Costanzo was created in honour of St. Costanzo  who was condemned to be beheaded. This cake was originally a poor food, prepared with simple ingredients that were easy to come by and was, in fact, made using bread dough as its base.

Flour, water and yeast are mixed together and left to rise at a constant, medium temperature for about 3-4 hours, in covered plastic containers. When the dough has doubled in size, the following ingredients are added: sugar, raisins, diced candied citron, pine nuts, aniseed and extra virgin olive oil. The dough is kneaded until it is smooth, made into ring shapes and five diagonal cuts are made on each ring, representing the five gates of Perugia. The rings are then put onto a baking tray and cooked in the oven for about 30 minutes.